This Lesbian Literary Love Fest takes the form of a cat fight! Join Brooklyn-based and ex- Austinite performer, writer, professor, and Girls in the Nose singer, Kay Turner, as she emcees a showdown between Gertrude Stein and Susan Sontag to determine who’s hottest. Twenty hometown Austin Gertrude and Susan imitators square off on-stage for a hilarious competitive reading of Stein’s love notes to Alice and Sontag’s sexy journals to herself. Then the audience votes to decide which of these lesbian icons writes with the hottest pen! The NYC production resulted in a tie; San Fran queers voted Susan by 4 but balloting was tainted. We seek vicious partisans—devoted Gertrude fans and undying Susan supporters. Dress up! Wigs are de riguer: the pate or the pile with streak o’ gray.

When Gertrude Met Susan is one of Kay Turner’s recent queer pedagogy projects that lift queer texts off the page into the common space of performance and audience engagement. Lessons are otherwise learned…. 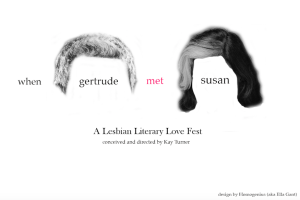