In December of 2013, a small group of queer artist and festival friends were catching up over some snacks and libations when the conversation turned toward the contemporary festival scene in Austin. We agreed that this scene was unparalleled and that queer culture in Austin was at a creative zenith. At the same time, we felt that something was missing: a queer space (both in Austin and beyond) that encouraged participants to explore beyond their artistic comfort zones, that facilitated new interactions between artists, academics and audience members, and that brought together LGBTQIA artists of all stripes from around the globe. The more that we discussed this vision for a new type of queer festival, the more excited we became and, by the end of the evening, OUTsider was born. 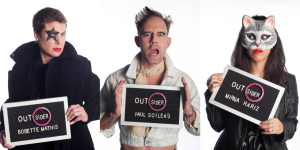 As conceived at this initial meeting and subsequent gatherings, OUTsider will be the only queer festival of its kind in the United States. Our goal is to provide a stage for, to celebrate, and to bring focus to the diversity of queer art and expression in all its myriad forms, including film, theater, performance art, music, writing and visual art. The first annual OUTsider will take place over five days in February of 2015 (dates TBD), and will include an academic conference that runs concurrently with the festival. Additional “one-off” OUTsider events will begin in the spring of 2014 and lead up to the festival.