Artistic Director, Board of Directors 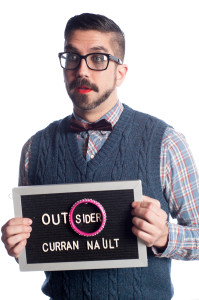 Curran Nault is the Artistic Director and Board President of OUTsider. Previously he was the Artistic Director of Polari: The Austin Gay and Lesbian International Film Festival (aGLIFF), the Director of Programming for the Austin Asian American Film Festival (AAAFF) and the Membership Coordinator for the Gay and Lesbian Medical Association (GLMA). Curran holds a PhD in Radio-Television-Film from the University of Texas at Austin (UT) and wrote his dissertation on queercore (queer punk) subcultural production. His scholarship has been published in The NeoAmericanist, Jump Cut, Feminist Media Studies, In Media Res and the anthology Queer Love in Film and Television. He is also responsible for creating and teaching the first course on Queer Media at UT. Curran occasionally dabbles in film production and was the Associate Producer of PJ Raval’s documentary Before You Know It (SXSW 2013 Premiere) and had a brief cameo in a section of Kyle Henry’s Fourplay (Cannes 2012 Premiere). In his spare time, Curran enjoys cat shirts, cat naps and cats.