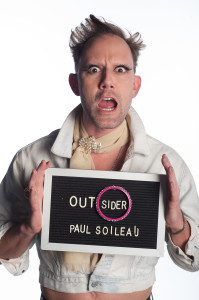 He made his film debut, working alongside George Clooney and Jennifer Lopez, in the critically acclaimed Out of Sight directed by Academy Award winning auteur, Steven Soderbergh, playing the role of the feisty prison whore, Lulu. He has starred in Fourplay: San Francisco / Tampa, the second film project of Independent Spirit Award nominated director Kyle Henry, for which he received the Best Actor award at the MiMi LGBT Short Film Fest in Barcelona. He also starred in Slacker 2011, working alongside PJ Raval, whom he has a rich history of productive collaboration, including the creation of Three Dollar Cinema and the subversive CHRISTEENE video collection.

Soileau’s solo work has been presented at the Lincoln Center-LCT3 in New York City, University of Texas at Austin, Soho Theater in London, and Sodra Teatern in Stockholm.

Paul is also an active member of The Rude Mechanicals (rudemechs.com), an Austin based non-profit theater ensemble having received over 170 local and national awards and nominations for their work.