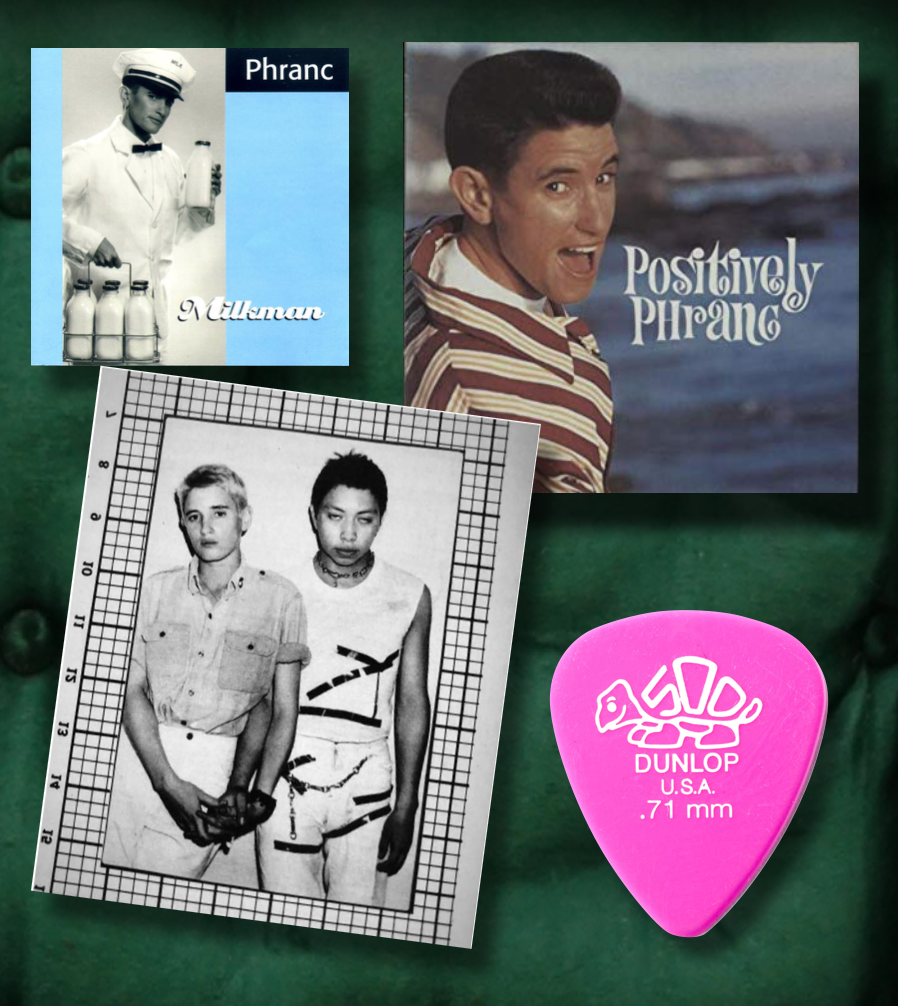 “It’s never too late to come out and be exactly who you are.” — Phranc

Susan Gottlieb, born August 28, 1957 in Santa Monica, California, didn’t waste any time coming out. She had already proclaimed her self-awareness at Venice High School by carrying around a “giant hardback copy of Lesbian Nation,” Jill Johnston’s 1973 salvo in the identity wars. Before that discovery, the teenager was having a hard time coming out and growing up. But fortunately, someone gave her a copy of Johnston’s book and her identity became clearer and less frighteningly solitary. Also central to her self-discovery was Alix Dobkin’s 1974 LP, Lavender Jane Loves Women, described as the first “blatantly lesbian album.” With these inspirations under wing, Susan dropped out of her senior year of high school and moved away from home. She was 17.

Adopting the name Phranc, she “dove head first into the lesbian separatist community.” She enrolled in the Feminist Studio Workshop, worked on lesbian publications, and frequented both powerhouses of Los Angeles feminist/lesbian culture and activism: the Woman’s Building (“arty”) and the Women’s Center (“political”).

Phranc also played her guitar. Deeply influenced by the new wave of “womyn’s music,” she dreamed of becoming a singer/songwriter. With a very romanticized image of San Francisco as a lesbian mecca, she headed north in 1976, initially doomed to disappointment: “I tell you there wasn’t one lesbian that was friendly to me in San Francisco.” Instead, she met a group of folks who invited Phranc to move in with them. Punk musicians were among her new roommates. Besides being friendly, they “were mad at a lot of the stuff I was mad at. …For the first time in my life, I fit in with people my own age.”

A radically different Phranc returned to Los Angeles in 1978, her heart now set on being in a band. How? By “looking cool” in the punk clubs. With short hair she adopted a “young Bobby Kennedy look” (circa age 12) and it worked. Edward [Stapleton] from Nervous Gender invited Phranc to join his band. Phranc also played in Catholic Discipline and the all-women group Castration Squad.

But, two years of screaming out misogynistic lyrics and slashing at her guitar led Phranc to make a career-defining decision – to go solo and acoustic so her politically underpinned lyrics could be heard. She would become an “affirmative lesbian missionary” through folk music, with its emphasis on stories.

“Take Off Your Swastikas” was Phranc’s first song to gain attention. While performing in punk clubs she had quickly tired of seeing the Nazi symbol on clothes. “Swastikas were this big deal for me, being pretty strongly identified as a Jew, and being pretty strongly identified as a dyke.” Finally, with enough material for an album, she recorded eleven songs for her debut album, Folksinger, released November 13, 1985. Her lyrics examined an array of themes including female mud-wrestling (bad), and female athletes (great). Phranc’s pleasant voice and excellent acoustic guitar playing worked well for both live performances and this album.

Four years later came her second album, I Enjoy Being A Girl (Island Records) which explored subjects like the difficulty of love in a bunkbed, surfing, the evil of apartheid, tennis star Martina Navratilova, and Phranc’s two grandmothers. Island put her on a tour as an opening act throughout England and Scotland. The self-styled “All-American Jewish Lesbian Folk Singer” was strumming her way into American and European hearts and minds.

1991 brought her third album Positively Phranc (Island Records). Although still wide-ranging in subjects, these ten new songs included a larger number related to relationships and lesbian identity. On a new tour with musical icon Morrissey, Phranc found herself playing before audiences of 10-20,000. She was at the peak of her success. But on July 2, 1991, six days before scheduled to play Madison Square Garden, Phranc received word that her brother had been murdered. She flew home immediately. As a no-show at Madison Square Garden, she was dropped by Island Records. Soon, her only consolation was surfing.

After the trauma of her brother’s violent death, Phranc stopped performing for a couple of years. What got her back on stage and in the public eye was her full-drag version of Neil Diamond, Hot August Phranc. But eventually she had to set this act aside because she didn’t want to be seen as just a drag king.

In 1995 she made a 5-song EP Goofyfoot with some of her friends from the LA queercore music scene. Songs that were unabashedly lesbian in theme were joined by covers of “Mrs Brown, You’ve Got a Lovely Daughter” and “Ode to Billy Joe.” Surfing reappeared in the instrumental title song “Goofy Foot.”

In 1998 on her own label Phancy, Phranc released a 10-song album Milkmanm, revisiting the liking vs. loving conundrum, but also expressing anger in several of the songs, including one addressed to her brother’s murderer. Her Jewish heritage is also celebrated.

From 1998 until now Phranc has recorded four singles, but no albums. She continues to perform and has been in several documentaries, including one revealing her great success as a Tupperware saleswoman. In 2008-2009 Phranc created a charming series of 20 Phranc Talk videos. She has also found fame as a visual artist, “The Cardboard Cobbler.”

I feel certain that just as she credits Jill Johnston and Alix Dobkin with saving her life through their words (written and sung) affirming the right to be a lesbian, Phranc has doubtlessly saved many young people from feeling isolated and uncertain. As Phranc says, “I talk about some stuff that people don’t want to listen to, and I believe that it’s really important for me to be out as a lesbian—on stage, in my life, every day. In the market, in the bank, wherever I go, all the time. That’s my job.”