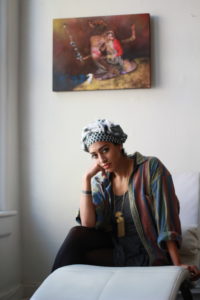 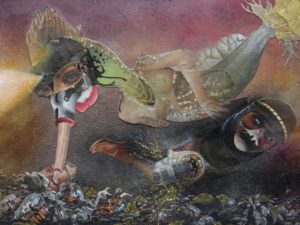 In creatures from the earth made of earthly materials (2016) I explore visual manifestations of queer postcolonial hybridity, translating liminalities of identity and home into mixed media collage. My clippings are sourced primarily from popular fashion magazines from the US and India, putrid with racist and sexist notions of beauty and value, and National Geographic, where black and brown bodies are exoticized through a colonialist gaze. I cut the bodies into pieces, an act that removes them from their problematic contexts in order to recombine them with other bodies, animal and human. They are whole and in pieces, grotesque and transcendent, the violence of their histories evidenced in the scars of their survival.

The hybrid creatures exist in a dreamlike dystopia that is simultaneously futurist and ancient. This environment is inspired by Islamic mythologies as well as Afrofuturism, both of which harness magical realism to imagine miraculous possibilities in the face of struggle. More specifically, “creatures from the earth…” non-linearly describes an apocalyptic catastrophe, a ripe moment that is terrifying to imagine, yet seductive in its revolutionary potential. Destruction and transformation is illustrated in the collaged figures, and echoed in their violently shifting landscape. The world is being cleft asunder, in order for a new world to begin from its fragments. Who will inherit the earth?