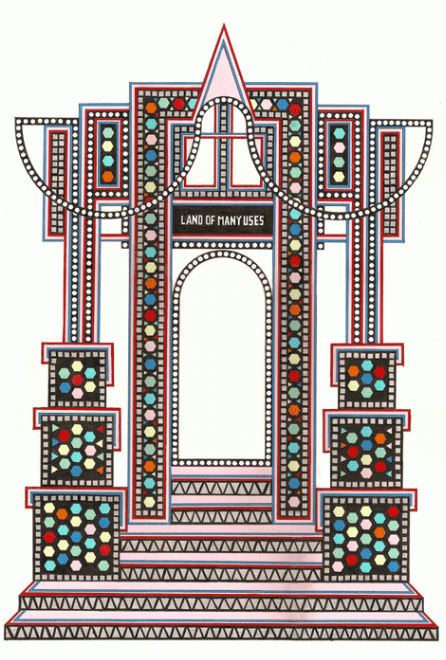 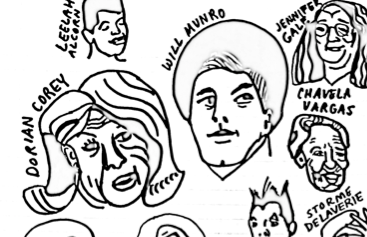 MASS Gallery, in conjunction with OUTsider Festival, is pleased to present Close Encounters: Fantasizing Queer History, a panel and artist talk featuring artists from two exhibitions, both presented simultaneously in Austin, that center on concepts of queer(ing) history.  Artists from Friendship and Freedom (MASS Gallery) and The Gay Wax Museum! (OUTsider Festival) will be in conversation about artwork that recreates and reimagines queer history, highlighting the camp and nostalgia of our imagined pasts. The panel will be moderated by Erin Gentry, co-curator of Friendship and Freedom and will feature Ben Aqua, Edie Fake, Paige Gratland, and Silky Shoemaker.

Friendship and Freedom is a group exhibition of contemporary queer and feminist artworks by Leah DeVun, Edie Fake and the collective known as Nightmare City. The artists in Friendship and Freedom each present work that exists at the crossing of gender, politics, identity, and historical past. Using history as a starting point, these artists express a desire to create ideological and physical spaces in the present for social action, community and camaraderie.Friendship and Freedom is on view January 23rd – February 28th, 2015 at MASS Gallery.

The Gay Wax Museum! is a group exhibition of 3D, life-size dioramas depicting the marvels, despairs, triumphs, experiments, bloopers, possibilities, and cummings-together of queer life as we remember, imagine, and create it. Arranged in traditional wax museum “vignettes” but rendered in many sculptural mediums, the show invites artists and viewers to explore our herstories of past, present and future, literal and fantasized. The Gay Wax Museum! is a part of OUTsider Festival 2015, taking place in and around Austin February 18 – 22.

Edie Fake was born in Chicagoland in 1980. He graduated from the RISD in 2002 and has since clocked time in New York, Los Angeles, San Francisco and Baltimore. He was one of the first recipients of Printed Matter’s Awards for Artists and his collection of comics, Gaylord Phoenix, won the 2011 Ignatz Award for Outstanding Graphic Novel. In 2011 he helped found the Chicago Alternative Comics Expo (CAKE) and writes reviews for the blog Book By Its Cover. Fake currently lives in California where he is an MFA candidate at the University of Southern California.

Paige Gratland is a Canadian artist who for the past decade has combined interdisciplinary forms to create conceptual work through a pop aesthetic. Gratland’s practice is located in a continuum of feminist sculpture and artist multiple production in Canada. Her work has been distributed through Art Metropole (Toronto) and Otherwild (Los Angeles.) Previous projects have appeared in C Magazine, The Walrus, Geist, Fuse and the Phaidon book Art and Queer Culture, edited by Catherine Lord and Richard Meyer. Multiples can be found in collection at the National Gallery of Canada (Ottawa).

Silky Shoemaker is an artist, performer, and community organizer living in Austin TX. She was the creator and co-host of CAMPCAMP! Monthly Queer Performance Night, Trivia Travesty with Rebecca Havemeyer, and is one of the organizers of Gaybigaygay Music Fest. Shoemaker is also the curator of The Gay Wax Museum!, a dream over ten years in the making.

With each exhibition, MASS solicits participating artists to devise a program designed to provide new methods of engaging the public’s curiosity, inviting them to participate intellectually or physically with the exhibition space, as well as the artist’s work and concepts. Open and broad, this prompt can be approached in a multitude of ways: performance based, passive, or completely radical in execution or thought. Close Encounters is a challenge to the artist, as well as the audience, and is designed to provide a new way of encountering and understanding the creative process.