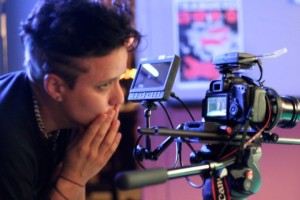 Bug Davidson is a motion image artist and film director that lives and works in Austin, Texas. Davidson recently completed multi channel video work as part of the Hyphen Collective, collaborating with musicians and musicologists from Stanford and Tufts University to create Burney’s Musical Tour, a live performance with video. Davidson received a Puffin Foundation grant to complete a solo show of video and photography at the Howard Art Project in Boston titled Rule of Three in 2014. Bug has screened their experimental film work internationally for the last ten years, and received the Polari Filmmaker Assistance Award to finish the short film Nothing Like Ivanhoe. Davidson founded the Homoscope Film and Art Festival (08-13) in Austin and is currently on the board of the OUTsider Arts Festival. Bug has studied at the School of the Museum of Fine Arts Boston, Tufts University, The School of Visual Arts NYC and The Irish Film Center Dublin. Bug will be taking part in the Toronto’s Copycat Academy this summer, a  masterclass produced by Hannah Hurtzig of Berlin’s Mobile Academy and Luminato Festival.