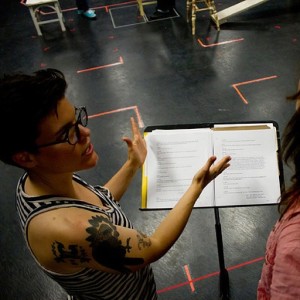 Will Davis is a transgender theatre maker focused on new and devised work. Both kinetic and visceral, you will know Will’s work by the way it moves.  Will has developed, directed and performed his precise and physically challenging work with Red Tape Theatre, Salvage Vanguard Theatre, The Duplicates, The Fusebox Festival, New Harmony Project, Orchard Project, Performance Studies International at Stanford University, The Kennedy Center MFA Playwrights Workshop, New York Theatre Workshop, Southern Rep and JACK.

Upcoming work includes productions of Colossal by Andrew Hinderaker with The Olney Theatre Center and Mixed Blood Theatre and the development of two new devised works: Plays for Horses a new work for a horse, and The Boy from the Circus a love letter for the ghost of William Inge. Additionally this summer Will directs the world premier of Bright Now Beyond a new musical by Daniel Alexander Jones.

With Michael Rau,Will developed the curriculum and leads the NNPN Kennedy Center MFA Showcase Directing Intensive and the Snow/Summer Camp Directing Workshops at the Strand Theater in Baltimore, MD.

Will is currently a 2050 fellow with NYTW and holds a BFA in Theatre Studies from DePaul University and an MFA in Directing from UT Austin.