Before Internet dating and hookup apps, The Handkerchief code was largely used by gay men in the 1970’s to distinguish sexual preferences and fetishes in gay clubs and on the streets of places like San Francisco and New York. In Hanky Code: The Movie, Periwinkle Cinema, San Francisco’s queer experimental film collective brings Queer and Trans filmmakers across a spectrum of genres, styles, genders, and locations to dissect the code in this epic anthology feature comprised of 25 short films! Each filmmaker or filmmaking team tells a story of a different color/fetish of the code. Films range from narrative to experimental to erotic and animated, with many films redefining the traditional code with colors, patterns, and fetishes up to creative interpretation of the artist.

Screening in partnership with allgo. 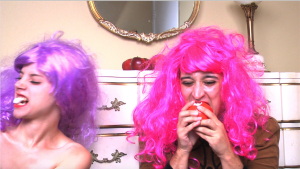 F to is a queer faerie tale that is a performative video collaboration between Sarah Hill and Hayley Morgenstern.

F to takes its visual cues from the film Daisies, written and directed by Vera Chytilová, the writing of Angela Carter, as well as the historical renditions of fairy tales in both literature and cinema.

F to becomes a visual representation of our textual/theoretical research about FTM transgender and lesbian histories and their relationship to each other.

F to becomes a queer engagement with normative tropes of hetero-narrative fairy tales.

F to subverts these tropes of punishment used in fairy tales to enforce strict gender and sexual binaries.

F to becomes a visual non-linear narrative relishing in the queer pleasures of romance.