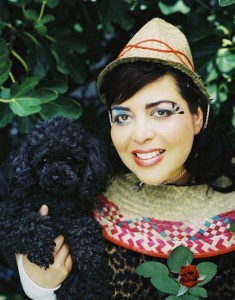 Nao Bustamante is an internationally known and beloved artist, originally from California; she cut her teeth as an artist in the San Francisco “Art Scene” of between 1984-2001. She attended San Francisco Art Institute, where she was under the influence of the notorious New Genres department. She now resides in upstate New York, where she teaches and canoes with her poodle, Fufu (who also has an IMDB page).

Bustamante has presented in Galleries, Museums, Universities and underground sites all around the world. She has exhibited, among other locales, at the Institute of Contemporary Arts in London, the New York Museum of Modern Arts, Sundance 2008, 2010, and the Kiasma Museum of Helsinki. Her movies have been shown at Outfest in Los Angeles and Mix in New York City among other festivals. Bustamante has been published by the Theatre Communications Group in the book, Out of the Fringe, as well as the Theatre Drama Review, published by the MIT Press. In 2000 she received the GLBT Historical Society Arts Award. In 2001 she received the prestigious Anonymous Was a Woman fellowship and in 2007 named a New York Foundation for the Arts Fellow, as well as a Lambent Fellow. Currently, Bustamante holds the position of Associate Professor of New Media and Live Art at Rensselaer Polytechnic Institute.