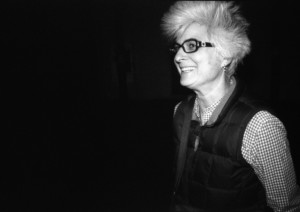 A Texas native, Gretchen moved to Austin in 1981 after finishing up three years at the prestigious High School for the Performing and Visual Arts in Houston where she was in a band with Sara Hickman. She immediately fell into the flourishing, incredibly creative Austin punk scene. Emboldened by the unapologetic and sexy outness of such local gay punk stars as Biscuit of The Big Boys and Gary Floyd of The Dicks, she decided to forge a path of her own in the hitherto underrepresented genre of “lezzie rock.” Flanked by her wonderful gay and straight, male and female band mates and vowing to put the “sex back in homosexuality,” Meat Joy released a “…stinging, springy assault on sexual warfare that has to be heard to be believed” according to New Music Express, Oct. ’84. After winning Best Avant-Garde/Experimental Band in the Austin Chronicle’s 1984-85 Music Poll, they, of course, broke up.

Saddened but free, Gretchen quickly formed two different all-girl bands in the summer of 1985. Girls in the Nose was the more rocking, electric outfit and Two Nice Girls was the more acoustic. Two Nice Girls’ first album spawned a couple of college radio “hits”  and they also won more Austin Chronicle Music Awards as well as the prestigious GLAAD (Gay and Lesbian Alliance Against Defamation) media award. Things were great, then things got hard, and the cliché of “musical differences” tore Two Nice Girls asunder. One of the differences was Gretchen’s desire for an even more experimental approach to music. After a brief tenure and tour with Girls in the Nose (who had been flourishing nationally) in the early 90s, Gretchen began her solo career, followed by stints with the Gretchen Phillips Xperience and Lord Douglas Phillips.

The dawn of the new millennium has seen the formation of Gretchen’s NYC fag/dyke duo, Phillips & Driver, co-starring New York’s downtown superstar David Driver, and The Gretchen Phillips Ministries, her popular country/gospel band co-starring Jo Walston and Andy Loomis. In 2006, Gretchen formed A Joy Division Cover Band whose sound and repertoire is self-explanatory. Ever searching for even more sensation, she finally realized a long-cherished dream and formed Gretchen’s Disco Plague (It’s Infectious!) in 2008.  This is an ever-changing band of precious like-minded cohorts who all join in improvising disco songs on the spot. Gretchen’s beloved Yamaha DJXII is at the center and who knows what’s going to happen around the amazing pre-sets designed by brilliant Japanese engineers?! Vitamin bottles filled with miscellaneous stuff are passed around to the audience to use as shakeys. Audience participation is encouraged and costumes are a must.